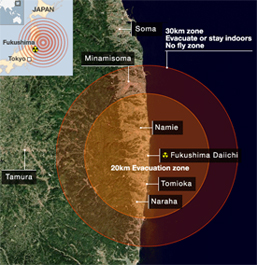 The situation with the nuclear reactor at Japan’s Fukushima Daiichi plant continues to be dire, but now it seems that the fallout of radiated caesium-137 and iodine-131 are now at levels that rival those of Chernobyl. Now, the iodine shouldn’t pose a long-term risk as the half-life for the substance is around eight days. The concern for health officials comes from the caesium, which can linger for thirty years.

Radiation levels remain higher than normal inside the evacuation zone around the plant, though both the Japanese Science Ministry and the United States Department of Energy had found high levels of radiation outside the 30 km evacuation area. Much of the radiation is located along a path that leads north-north-west from the plant and stretches between thirty and fifty kilometers from the plant and stretches 45 kilometers across.

The threat to people in the area is, as of now, unknown. According to Gerhard Proehl of the International Atomic Energy Agency, the threat determines more on where and how much caesium has landed. If the radioactive material has landed on sandy soil, it will release far more easily than if it is absorbed my a more clay-like substance.

Of course, this is all relative. In the end, we’re still talking about best-case scenarios for nuclear radiation.