Pope: Internet Isn’t the End of the (Good) News 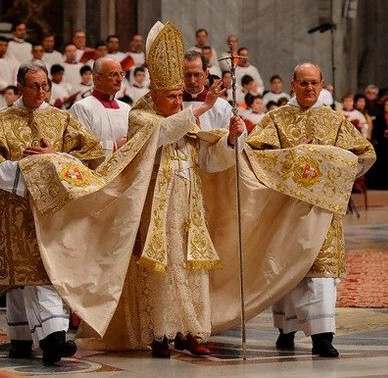 In the digital age too, everyone is confronted by the need for authenticity and reflection. Besides, the dynamic inherent in the social networks demonstrates that a person is always involved in what he or she communicates. When people exchange information, they are already sharing themselves, their view of the world, their hopes, their ideals. It follows that there exists a Christian way of being present in the digital world: this takes the form of a communication which is honest and open, responsible and respectful of others. To proclaim the Gospel through the new media means not only to insert expressly religious content into different media platforms, but also to witness consistently, in one’s own digital profile and in the way one communicates choices, preferences and judgements that are fully consistent with the Gospel, even when it is not spoken of specifically. Furthermore, it is also true in the digital world that a message cannot be proclaimed without a consistent witness on the part of the one who proclaims it. In these new circumstances and with these new forms of expression, Christian are once again called to offer a response to anyone who asks for a reason for the hope that is within them (cf. 1 Pet 3:15).

The Pope goes on to observe that online sharing, with its plethora of new kinds of relations and messages, “inevitably poses questions not only of how to act properly, but also about the authenticity of one’s own being.” Like Mark Zuckerberg, he cautions users against “the illusion of constructing an artificial public profile for oneself.”

I’m not sure illusion in our public personae is such a bad thing—and anyway, given the challenges the Church has failed to meet in bridging the many gaps between its illusory public image and the actions of many members of its clergy, the stone of illusion is best left on the ground by this Pope. On the other hand, Benedict’s recognition of the essential health of the public sphere, irrespective of the media we use to manifest it, seems healthy enough.

Benedict’s message, released today, observes the feast of Saint Frances de Sales, a 17th-century Swiss priest who fought Calvinism from pulpit and print, and whom the Pope calls the patron saint of “communications workers.” Isidore of Seville, whose Etymologies was an early reference work that was database-like in its dazzling cross-referentiality, is the patron saint of the Internet; Saint Francis de Sales, who was a facile stylist in three languages, has long been the patron saint of writers and journalists.