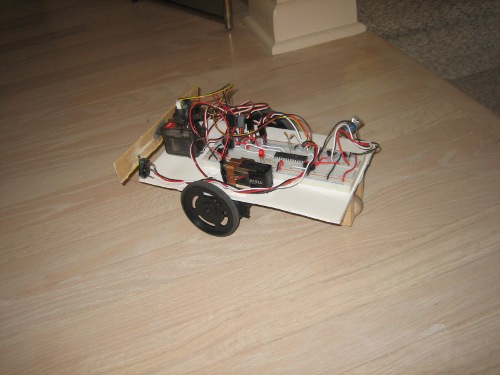 My buddy Peter Wang made this path finding robot using a PIC16F876 chip. The interface is done with WinPic software uploaded via serial port. The robot detects obstacles in its path, moves towards them and then avoids them by going around them or by going in the opposite direction. It’s run by four AA batteries which power three motors and a 9V battery to power the chip. A motion sensor attached to a servo allows the sensor to scan both 90 degrees left and right. Bumpers made from switches allow the bot to detect collisions and thus avoid disastrous crashes. We’re using it to chase my dog around the house as I write this.