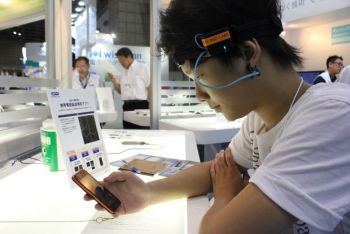 You can always rely on the Japanese to come out with cool new gadgets that help read minds. Japan Trends recently covered a new application for Android that can measure your brainwaves (or lack thereof). They had several comments about seeing the application in action, including:

Introduced at today’s International Modern Hospital Show, this app’s ability to measure the amount of concentration and meditation occurring in the brain while the users perform simple tasks or are heavily indulged in their video game, truly grasped our attention.”

Basically, you play really simple games on the Android, and wear a headset that measures your neural activity. When you’re finished, you can see exactly how much interaction is going on inside your head. You can even see which areas of the brain you used during the simulation.

Pretty cool, but I know at least a few people who wouldn’t be too pleased with their post-game results.