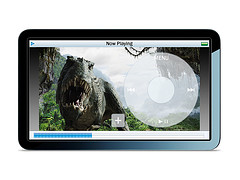 Remember that litle rumor about a true iPod Video? One that is only a touch screen with a type of a scroll wheel on the screen, not just this thing we have now that just plays videos. So what if we’ve been talking about this for almost a year now? It’s probably really hard to make, and damn expensive. Whether Apple is waiting for costs to go down, or it is having development problems, we haven’t seen this device yet. So AppleInsider is currently reporting that it has some interesting news… They are saying that they believe that Apple has three different iPods coming on the way in 2007. So when 2007? No specifications, but the annual Macworld Conference does roll around during the second week of January. Who knows, maybe we’ll see the iTV as well! — Nik Gomez