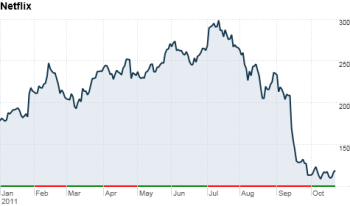 Ever since Netflix first announced that it would be splitting its DVD and instant streaming services into separate subscriptions (resulting in a rate increase), customers haven’t been happy. Many people protested the price hike, especially since most Americans are already suffering in a tough economy.

Well, it looks like customers are already taking action to cut their losses. Netflix announced that they’ve currently lost 800,000 subscribers in the past quarter, and that they expect to lose even more before the end of the year. On this news, Netflix stock has dropped over 35%.

Today, Netflix stock was around $78 per share. If you remember correctly, back in July Netflix was trading at around $300 a share.

Hopefully, Netflix finds a way to encourage subscribers to return to their service, before they continue losing subscribers into the next financial year.