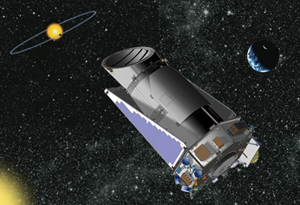 Say you’re a NASA scientist. You’ve spent years working on a projects that has cost tens of millions of dollars. When the project finally launches into space to begin its mission, you are filled with both pride in seeing your work to fruition, and a sadness that you will never see or touch the device again.

Now imagine how pissed off you would be if said project went silent for six days. That feeling of rage that you’re experiencing is, I imagine, what the scientists at NASA’s Ames Research Center felt in the late hours of March 14th, when they realized that the Kepler satellite had stopped sending them data.

So, what exactly happened? Well, according to NASA there was a hiccup during a standard reset of the network interface card which forced the satellite to go into safe mode. For those of you wanting the more technical explanation…

This safe mode orientation provides the vehicle with the maximum power and limits the buildup of momentum from solar wind. The spacecraft also swapped to its backup subsystem interface box (SIB), an electronics component that provides thermal and power distribution control to all spacecraft subsystems, and powered off the photometer, the instrument used to measure light intensity to detect planets. This is a normal procedure when the spacecraft enters safe mode.

Luckily there is nothing left to fear. At 2:45am EDT on March 20th, after six-plus days of silence, Kepler came back online and contact was reestablished with the ARC. This is good news for those of us who are curious as to what is out there, as well as to those who worked for years on this project, to say the least.