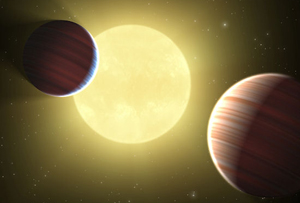 The Kepler Telescope has been rather busy, relaying a cornucopia of information as of late. The latest bit of info? In the star system with the ever-catchy name “KOI-730,” there are two planets that share the same orbit.

The dual planets share the same 9.8-day orbit around the star at the heart of KOI-730, with one of the celestial bodies being 60-degrees away from the other, which puts the other body in the “sweet spot” of the the orbits. These sweet spots occur when one object, like a planet, is in orbit around a larger object, such as a star This orbit creates two Lagrange points located 60-degrees ahead and 60-degrees behind the smaller object’s orbit. These Lagrange points would allow another body to share such an orbit.

This would give credence to the theory of “Theia,” which is the theory that our moon is the end result of a Mars-sized object colliding with Earth when the solar system was still in its infancy. So, the next time somebody asks about where the moon came from, you now have a theory.