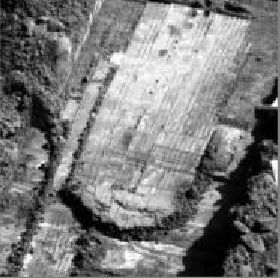 NASA says their Phoenix lander may have found water on Mars again. Last month, they thought Phoenix had discovered Martian ice, but it evaporated before they could were able to analyze it. Now, NASA is announcing that Phoenix has discovered another small trench which may contain frozen water.

Data transmitted from the lander has revealed a hard layer below the surface of the trench and researchers are hoping this material is Martian ice. On Thursday, Phoenix confirmed that the top of the trench (pictured above) had been scraped away sufficiently to allow the lander to obtain a sample of the possible ice. Currently, Phoenix is undergoing cleaning procedures to ensure that it can take and analyze the hard material without contaminating it. Those so-called “rocket scientists” over there at NASA better move fast and not screw things up this time.