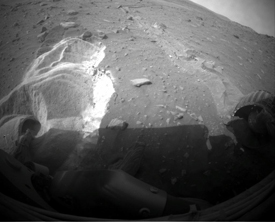 The Mars Exploration Rover A, known to us as Spirit, was launched on June 10th, 2003. It made its way to Mars, landing three weeks before its sister rover, Opportunity, on January 4th, 2004. In March 2010 NASA lost contact with the rover, and has been working for the past year to reestablish said contact. Those efforts appear to be coming to an end.

Spirit first became stuck in a patch of sandy soil in 2009. For a year, NASA attempted to move the rover from that spot but every attempt to do so resulted in failure. Then, in March 2010 Spirit‘s batteries drained to where the rover entered into a hibernation mode to conserve what little power is left. Now, after a year of trying to reestablish contact, NASA scientists are starting to give up hope that they’ll ever get a signal from Spirit again.

NASA’s Scott Maxwell summarized how the team was feeling:

Spirit was so close to us, just a year ago. Snap your fingers, and she’s a hundred million miles distant and we can’t even prove she’s alive.

As I opined when the Kepler team lost contact with their satellite for six days, it must be hard when you realize that the machine you spent months, if not years, of your life working on is now lost forever.

Still — we have Opportunity and Phoenix, which has been providing us with stellar images, as well as valuable scientific data.