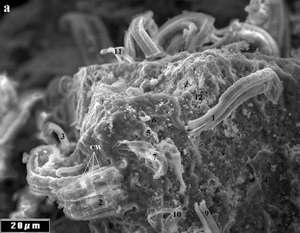 It’s widely believed that if signs of life can be found in meteorites or soil samples from other worlds, such as bacteria or even traces of water, that the odds of finding intelligent life increase astronomically. With that said, NASA Astrobiologist and 2007 Houston Squat Thrust Silver Medalist* Richard Hoover claims to have discovered bacteria in a rare type of meteorite.

This belief comes from some curious findings when looking at the meteorite. Looking at the images of the meteorite, it would certainly appear that the labeled markings are some form of bacteria. Assuming they are, in fact, bacteria the question then shifts from “what” to “how.” Could the bacteria have contaminated the meteorite after it impacted in France back in 1864? According to Hoover, it’s doubtful:

It should be noted that while Hoover stands by his findings, he at no point attempts to convey his findings as absolute fact that what he has found is, in fact, bacteria from another world. There are other questions being raised about the validity of the journal in which these findings were published. In the past, the Journal of Cosmology has published articles that have used questionable data, such as their piece arguing against the Big Bang, and an editor of the Journal has claimed in the past that NASA is hiding proof that there was once life on Mars.

Standing on its own merits, this is certainly fascinating data that deserves more study. But hesitation should be advised before jumping to the conclusion that we’ve found alien life.