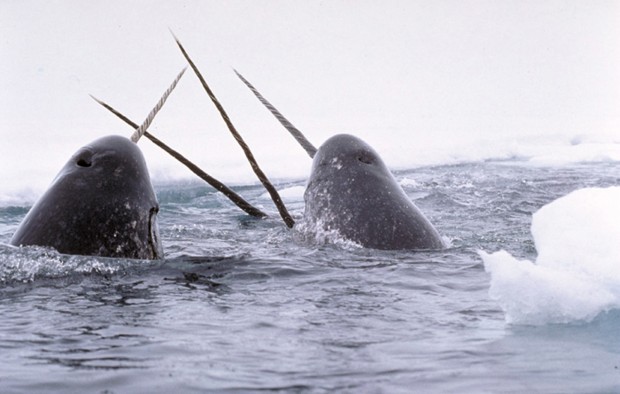 Narwhals don’t go to graduate school, and they’re not much use as grant-writers. But they’re able to do a few things oceanographers find challenging—such as dive to depths of nearly six thousand feet beneath the ice of Baffin Bay in winter. So scientists studying the warming of seawater in the Greenland current have enlisted them in data-gathering, according to a news report in Nature. Researchers affixed satellite-linked temperature-and-depth recorders to fourteen whales. The instruments are the size of a pack of cards; the narwhals weigh from 2,200 to 3,500 pounds.

Ironically, narwhals carry their own highly-sensitive thermometers in the form of their famous tusks—overgrown incisor teeth packed with ten million nerve endings, making them sensitive to temperature and water conditions. Unfortunately, the tusks don’t come with satellite uplinks.

The data they capture by the narwhals, reported in the Journal of Geophysical Research, shows that “previously documented warming in Baffin Bay has continued through 2007 and is associated with a warmer West Greenland Current in both of its constituent water masses.” Which could spell trouble for the narwhals, who are uniquely dependent on the stability of the Arctic environment. No wonder they’re so involved in the research.