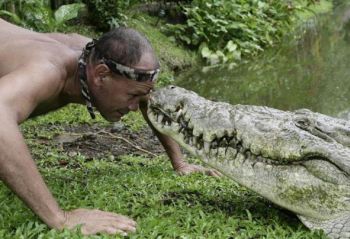 Have you ever wanted an exotic pet? How about a 17-foot long crocodile?

Crocodiles aren’t notorious for being the best pets. In fact, some people might argue that they lack the capacity to bond with humans. However, one man seems to have proven this wrong.

Chito is a 52-year old fisherman from Costa Rica. He rescued a crocodile that had sustained a bullet wound to the head. Chito gradually nursed the injured crocodile back to life, and named him “Pocho”. After ten years, Chito decided to begin working with Pocho, trying to teach him to be his companion.

Chito wrestles, hugs and plays with Pocho on a regular basis, much to the horror (and awe) of amazed onlookers.

Of course, we don’t recommend attempting to domesticate your own pet crocodile.