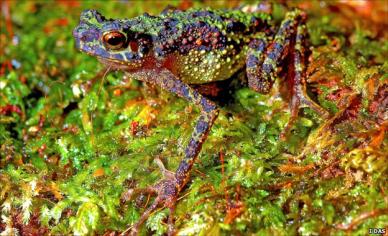 Scientists have announced that the Bornean Rainbow Toad — also known as the Smabas Stream Toad — has been rediscovered after not being seen for 87 years.

This unique amphibian was last seen in the 1920’s, where it was identified by a single black and white drawing. Before now, today’s researchers were skeptical if this mystery toad even existed.

When I saw an email with the subject ‘Ansonia latidisca found’ pop into my inbox I could barely believe my eyes. Attached was an image—proof in the form of the first ever photograph of the colorful and gangly tree-dwelling toad.” — Dr. Robin Moore, of Conservation International

Did you know that there’s actually an organization that’s leading the “hunt for lost frogs and toads”? Apparently they send out regular expeditions to find species of amphibians that are believed to be extinct.