Looking Up For the New Year 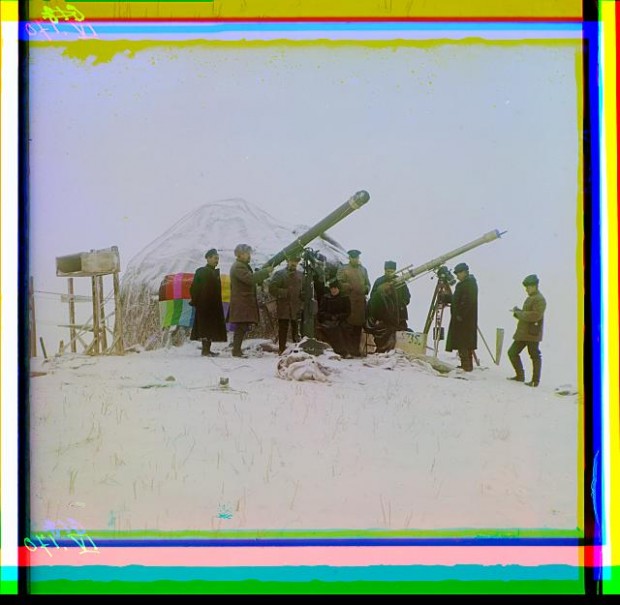 This photograph shows a Russian scientific-imperial entourage observing a solar eclipse on January 1, 1907, from Uzbekistan’s Tian-Shan mountains on the Golodnaia Steppe. It’s one of the incredible color photographs made by Sergei Mikhailovich Prokudin-Gorskii, photographer to the Czar, in the last years of the Russian Empire. Prokudin-Gorskii made his images by combining three black-and-white shots taken with red, green, and blue filters; the resulting transparencies were viewed in projection, using a “magic lantern” device that superimposed the color-filtered images on a screen. (This image is a digital color composite made for the Library of Congress by Blaise Agüera y Arcas in 2004.)

The party has gathered around a pair of telescopes to view the eclipse; they’re standing in front of a yurt, the classic portable dwelling of the Eurasian steppe. The colorful blanket draped on the yurt looks uncannily like a color-correction card. It doesn’t show up in Prokudin-Gorskii’s other photographs, though; I wonder if he placed it there to help color-correct an otherwise monochromatic scene; perhaps it was on hand to help discriminate the colors in solar flares made visible by the eclipse. Or perhaps the people of the Golodnaia steppe made blankets that happened to look like TV test patterns.

Regardless, the scene is a clash of contrasting nature and technology. The photographic process that recorded it was both a harbinger of twentieth-century imaging and a dead end—color photography would emerge not as an optical but a chemical process, itself now being superseded by digital means. The telescopes are a Galilean technology, improved but little changed since the seventeenth century. The yurt is a technology that stretches back to prehistory; for all its primitiveness, it seems beyond innovation and obsolescence in some intangible way.

Socially, too, the people in the photograph stood on the brink of change; the relations of feudal and imperial patronage that knit this scene together would soon be eclipsed by a transit of political innovation as dubious as it was deadly.

The eclipse Prokudin-Gorskii and colleagues had gathered to observe took place on the first day of the new year—reckoned in the Julian calendar, which was two weeks “behind” the Gregorian calendar observed in the West. Russia switched to the Gregorian calendar after the October revolution in 1917; one of the first sacrifices of the new Soviet people was a temporal one, sublimating two weeks of their lives into history for the sake of progress.

Of course, such niggling differences in calculation have no impact on orbital declination or lunar transits of the sun. From a sufficient distance—say, 31 million miles away—the Earth, its moon, and their orbital habits appear as quaint and timeless as yurts on the steppe.

Like the yurts, of course, these things too will one day be swept away. But on a more comprehensible time scale, we mark the passing of 2010, and wonder—humbly, hopefully, guardedly—what changes 2011 will bring.