Lightmare Watch – easy to read (for an LED watch) 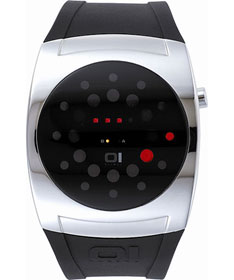 The new Lightmare watch by TheOne is actually remarkably easy to read compared to most LED watches. There are two rings of LED lights, each composed of twelve lights – the larger, inner ring tells the hour, while the smaller, outer ring tells the minutes in 5-minute increments. For more exact time-telling, there is a line of four LEDs in the middle of the watch face that show the number of minutes past the number indicated by the lit LED on the outer ring. Lastly, there are two lights just below the line of four, which reveal whether it is AM or PM. It’s a clever idea, and a lot easier to read than most LED watches. The Lightmare watch is available now for $145.