Large Hadron Collider May Be a Time Machine 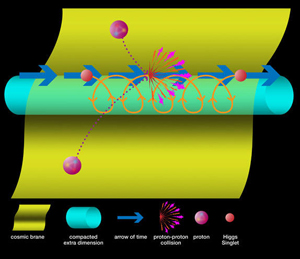 So, uh… funny thing happened with the Large Hadron Collider. You see, well, the device was designed to better understand the laws of nature by helping scientists answer some of the various unanswered questions about how the universe works. Back in the early days of the device, you may recall people being worried that the machine would kill us all because it opened microscopic black holes. While the Large Hadron Collider may still achieve such objectives, a theory being put forward by Vanderbilt’s Tom Weiler suggests that there may be another side effect.

One of the attractive things about this approach to time travel is that it avoids all the big paradoxes. Because time travel is limited to these special particles, it is not possible for a man to travel back in time and murder one of his parents before he himself is born, for example. However, if scientists could control the production of Higgs singlets, they might be able to send messages to the past or future.

Weiler does acknowledge that his theory is a long shot, saying “our theory is a long shot,” but it may not be as absurd as it seems. His research goes back to 2005, where research on neutrinos led to the idea of there being a “fifth dimension,” where traveling faster than light allowed you to travel back in time.

I would be lying if I said that I understood all the intricacies of the theory, and I feel that any attempt I made to explain it would be a disservice to you all. However, I wouldn’t be doing my job if I sat by and allowed for a news item about the possible invention of time travel to go unnoticed.