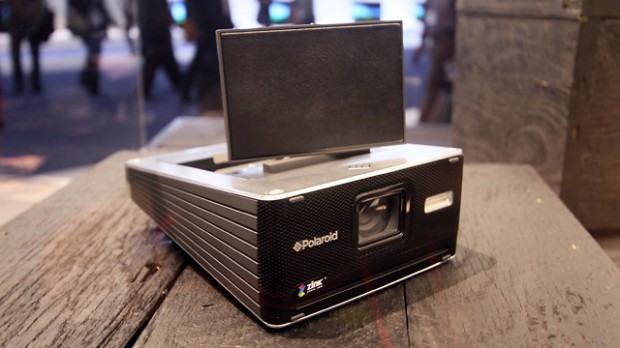 Polaroid’s digital-era consumer-market tailspin may be at an end, if a trio of new products with the Lady Gaga imprimatur fulfill their promise.

The camera’s nostalgia-driven design (above) conjures memories of the clunky instant cameras of the seventies and eighties. Within, Polaroid has essentially reverse-engineered their own instant film process, combining digital image processing with a Zink (“zero-ink”) printer that spits out Polaroid-sized photos on sheets of paper charged with thermo-reactive dye crystals.

While standard digital cameras beguile us with their immateriality—our images now have this disembodied, digital-cloud existence—the Polariod GL30 answers the latent need to produce an image that is a physical object, an icon or talisman to be held and shared.

While its retro look is undeniably charismatic, the GL30 is a big wedge of plastic and metal, the kind of thing Lady Gaga’s cameraphone-happy fans would seem unlikely to carry clubbing. Polaroid is also bringing out a slightly-more-portable Zink printer unit that will couple with smartphones and digital cameras for prints on the go.

The most out-there product: a visor-like pair of sunglasses with a built-in camera, which not only captures video and still images but projects them on the front of the glasses as well. Aristotle believed that our eyes emitted rays that detected objects to form images; ever since the 11th-century Egyptian scholar Ibn al-Haytham worked out that our eyes only passively received light reflected off of objects, we’ve been disappointed that our eyes don’t shoot pictures at the world. The most interesting thing about the techno-caprice of Lady Gaga’s camera glasses is that they resuscitate the ancient, Aristotelian understanding of seeing as a broadcast medium.

Polaroid calls its trio of Gaga-branded products the Grey Label. Arstechnica reports that the printer will ship in May, and will carry a price tag of $149; pricing and release dates for the camera and photo-shades haven’t been released. You can see Lady Gaga demoing the products at CES via Polaroid.com, where a glam rebranding seems fully underway.