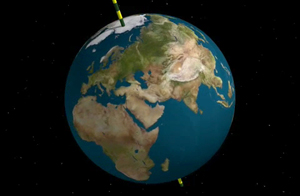 Daylight Savings Time went into effect on March 12th, but it seems that in addition to the hour of time we’ve “lost,” we have now lost actual time due to the powerful 9.0 earthquake that occurred off the coast of Japan.

1.8 microseconds is an incredibly small amount of time — two one-millionths of a second, to be precise. This isn’t the first time in recent memory that this has happened: The 2004 Sumatra earthquake that resulted in the tsunami that killed 200,000+ shortened Earth’s days by 6.8 microseconds, and in 2010 the Chile earthquake shortened days by 1.26 All the same, the fact that an earthquake can alter the length of a day, or alter the location of Earth’s axis, only goes to show you the true power of nature.

But how seriously should we take the news that the Japanese earthquake also shifted Earth’s rotation by 17 centimeters? According to NASA’s Richard Gross, not much:

Earth’s rotation changes all the time as a result of not only earthquakes, but also the much larger effects of changes in atmospheric winds and oceanic currents. Over the course of a year, the length of the day increases and decreases by about a millisecond, or about 550 times larger than the change caused by the Japanese earthquake. The position of Earth’s figure axis also changes all the time, by about 1 meter (3.3 feet) over the course of a year, or about six times more than the change that should have been caused by the Japan quake.

For those of you worrying, stop. These kinds of changes happen in nature all the time. We simply don’t notice it because, well, in the grand scheme of things these changes are practically insignificant.