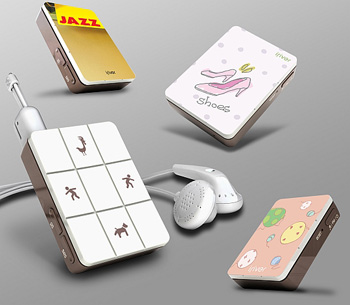 The upcoming iRiver S7 has fans of the company’s digital audio players eagerly awaiting its release. The leaking of a spec sheet a few weeks back only added fuel to the fire. Recently released pictures of the upcoming player have some people a bit confused, however. The pictures show a player nearly the exact size and shape of an Altoids tin, with a few buttons on the side and a headphone jack.   What’s really going on here is that the new players, in addition to MP3, Ogg, WMA, etc., playback, will feature a plain, flat front on which users can doodle, put stickers, or otherwise personalize the look of their DAP.   It’s a great idea, assuming it’s not an Altoids’n’Photoshop hoax. The iRiver S7 has not been officially announced yet, so there’s no price or date. Maybe soon! — Mike Payne