iPod DJ Mixing Studio For Under $40 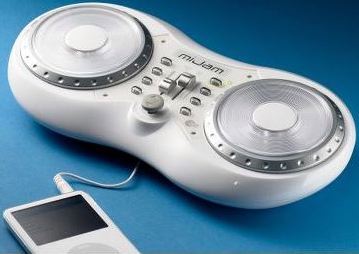 The question that springs to mine is “How’d they do it?”. The answer is still unclear, but then again, who the hell cares?! It’s a friggen iPod DJ Mixing Studio for under 40 friggen dollars! The device connects an any iPod or music device with an audio output and lets you create your own digital mixing effects for a minimal price related to other mixing equipment on the market. For such a minimal price, we can’t imagine that the quality of the miJam is as good as some of the more expensive ones are…or is it?

The miJam comes with two discs, that when rotated, create six different background fills, 3 drum, and 3 voice effects. Volume and tempo controls on the mixer assure that your effects can be heard over the volume of the music. It also can be connected to both PC’s and Mac’s so your DJing skills can be saved and shared with millions. Supposedly it’s good for ages 8 and up, but any parent that buys their 8 year old an iPod deserves to be shot. — Andrew Dobrow