Immortalize Your Dead Xbox with the RROD Coffin 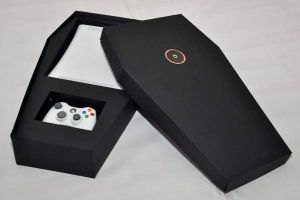 Have you ever had an Xbox 360 that fell victim to the dreaded RROD (red ring of death)?

Well, now you can immortalize your dead console in a coffin.

Australian designer Alexis Vanamois has developed a unique (and slightly macabre) accessory for your bricked Xbox 360 gaming system. Now, you can send your Xbox off in style by placing it in its very own, custom-fit coffin.

Not only is the mold inside specially designed to fit the Xbox 360 console — it also has a special slot where you can place an Xbox controller. Wouldn’t want your Xbox getting lonely six feet under.

It’s pretty sad when a console has such a high failure rate that accessories are designed specifically to complement “dead” consoles.