Holes in Martian surface hint at caverns below

The Mars Reconaissance Orbiter’s HiRISE camera can resolve objects about one square meter in size—so we can be reasonably sure there aren’t any sandworms on Mars. But these holes imaged by the MRO in the fall of 2010 do give off heat during the Martian night, which likely indicates that they’re portals to a network of caverns trapping solar heat and radiating it into the cooling nocturnal atmosphere. 1017 feet and 590 feet across respectively, they’re sizable apertures—and close-up images reveal tantalizing details: 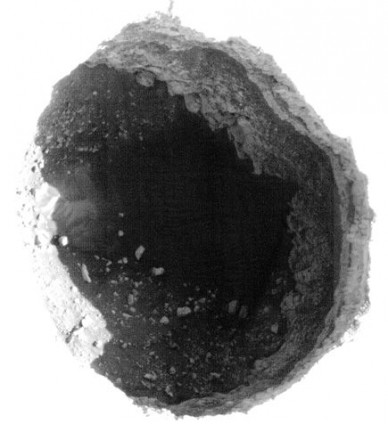 The holes, which lie hard by the Ascraeus volcano southeast of the vast Olympus Mons volcano in the planet’s northern hemisphere, may result from collapses into caverns carved by lava flows long ago. Researchers wonder if the caverns might represent a safe harbor, past or present, for life on Mars—but that’s the de rigeur question asked of every newly-discovered Martian figure. It’s a remarkable picture, but there’s no need to start propitiating the Grandfather of the Desert just yet.