The History of Televisions

2014 marks 152 years since the first flickers of the commercial giant we now call a television, first made an appearance in the mid-19th century. Since then, it has not only won itself status as an unparalleled source of entertainment but has also emerged as one of contemporary society’s favourite mediums for advertising, information and news.  Read on for a fascinating overview that will help you grasp just how far television sets have come.

According to historians, an Italian physicist by the name of Abbe Giovanni Caselli first created the Pantelegraph in 1862. Utilising a series of wires to transfer a still image from one source to another, the device was celebrated as modern day magic. 11 years later, English electrical engineer Willoughby Smith built on Caselli’s foundations, experimenting with using a fusion of selenium and light to transfer images via electric signals. 1884 saw further revelations when German technician Paul Nipkow achieved 18 lines of transferred image resolution using a rotating metal disk mechanism. At the time this was a huge technological advancement – however compared to modern models, it’s a far cry from brands such as Sony that retail TVs with a huge 4K of resolution! Finally, on August 25 1900, Russian scientist Constantin Perskyi coined the word ‘television’ at the annual World Fair in Paris.

The roaring twenties of television

Come the 1920s, television was well and truly on the agendas of contemporary engineers. In 1924, Scotsman John Logie Baird invented a semi-analogue television capable of displaying dynamic silhouette pictures and, just one year later, unveiled the world’s first television image. Consisting of a 30 line greyscale scanned picture broadcasting at a rate of five images per second, the humble TV never looked back! 1929 saw Baird open the first ever public television studio and by the 1930s, TVs were beginning to make an appearance in domestic homes across the globe.

Compared to today’s sleek designs, early television models were brazenly big and bulky. There were very little programs to choose from, with broadcast time generally reserved for major events. While the Second World War hindered the progress of mass TV manufacturing, modernisations and improvements still continued.  The decade also saw the broadcast of the world’s first paid TV advertisement, a concept that has shaped the face of modern day marketing. 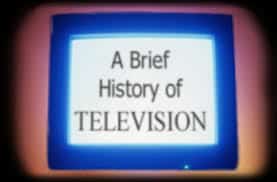 By the 1950s, television sets had dropped in price and were becoming a common luxury in many households. By 1967, the world was introduced to colour TV and complementing the technological advancement came the introduction of an increased number of channels. Cable TV enjoyed unprecedented popularity with 1982 seeing SKY1 launch the UK’s first ever satellite TV channel.

The last few decades have seen the television evolve in leaps and bounds. Flat screens, LCDs, HDs and plasmas are all common place, with new advancements constantly being made. Today, 3D technology can even bring an eye-popping onscreen experience to the comfort of your own home. Click here to find out more about state-of-the-art Toshiba 3D TV technology. Smart TVs have also revolutionised the viewing experience, making television sets intelligent and perceptive devices that cater to the demands of modern day life. Curved TV sets are the latest technological trend to emerge, with companies such as Samsung offering viewers a streamlined screening experience designed to complement the natural curvature of the eye.

It’s amazing to think about how far we have come from the humble days of black and white boxes. Today, TV is colourful, smart and even available in 3D. We can only begin to imagine what advancements will appear in the coming years!