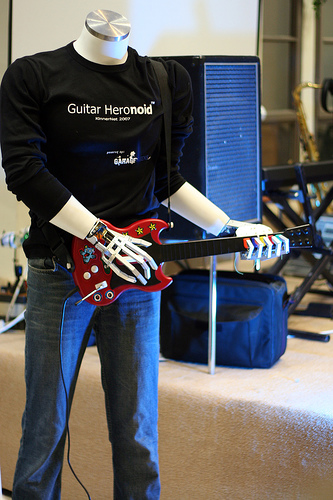 Other than the cool robot factor, we don’t understand why you would want a Guitar Heronoid. Isn’t the point of the game to beat it yourself? If you want high score bragging rights, leaving it up to a robot seems like cheating big time. Though, in any case, this Guitar Hero robot is capable of mastering even the most expert of levels.

The robot is divided into two separate parts, the brain and the body. The brain generates game commands after analyzing and detecting the signal emitted from the PS2. The body then takes those commands, and interprets them into finger movements. Next time my ex-girlfriend wants to strut her GH skills in my face, I’m pulling out my little robot friend. — Andrew Dobrow