Got the Blues? It’s blue skies from now on. 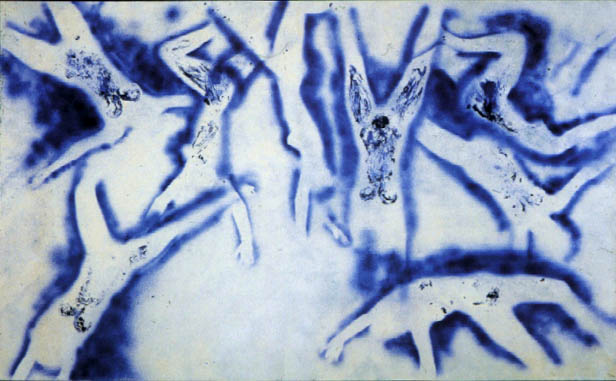 When it comes to emotional resonance, the color blue exerts an ambivalent power. It’s no fun to get the blues—but blue skies are a good thing. It turns out that there’s some science behind our relationship with blue: in a paper published on October 25 in the Proceedings of the National Academy of the Sciences, a European team of researchers reported discovering the brain’s uniquely intense response to the color blue. Exposing volunteers to alternating periods of blue and green ambient light, the team used magnetic resonance imaging to discover that the blue hues stimulated the amygdala and the hypothalamus, areas of the brain intimately tied to emotional response.

I have to wonder if the scientists behind this experiment were using so-called “International Klein Blue,” an especially eye-popping hue developed by the French artist Yves Klein in the 1950s. The subject of a retrospective show now running at Minneapolis’ Walker Art Gallery, Klein was France’s answer to Andy Warhol, and an artist uniquely tied to his work in one color. (Perhaps only Picasso was more effective at turning blue into a brand.) Klein’s first act as a serious artist, at the age of nineteen, was to gesturally “sign” the bright blue sky over a beach in Southern France, claiming the reaches of air and space as his own work of art.

Klein was best known for his so-called “anthropometries”—large paintings like the image above, which he made by directing nude models to press themselves against the canvas while smeared in buckets of Klein-blue paint. He often made these paintings with audiences in attendance, his models ritually slathering themselves in Klein blue while small orchestras provided musical accompaniment—all very sixties, very swinging, very cool blue. And yet the paintings that resulted from these ultramodern exhibitions look like cave art from the Pleistocene. (To eyes conditioned by today’s technologized culture, on the other hand, a field of International Klein Blue looks like a motion-capture screen.)

Klein was also a technological utopian. In his last years he cooked up elaborate plans for an “air architecture” in which walls made of air would invisibly shelter an enlightened humanity, taking the place not only of walls, ceilings, and pavement, but of clothes as well—creating a transparent city whose perpetually nude inhabitants would wander about free from constraints, in perfect leisure. Klein lacked the technical know-how to realize his air architecture; he also lacked the time, dying in 1962 at the age of 34. (His son, Yves Amu Klein, grew up to be an artist and highly-skilled roboticist whose sculptures fuse natural forms with serious cybernetic gadgetry.)

Klein’s was fanciful vision of the future, to be sure—but in his intuitive grasp of the power of the color blue, Klein showed how artists can anticipate the sciences.