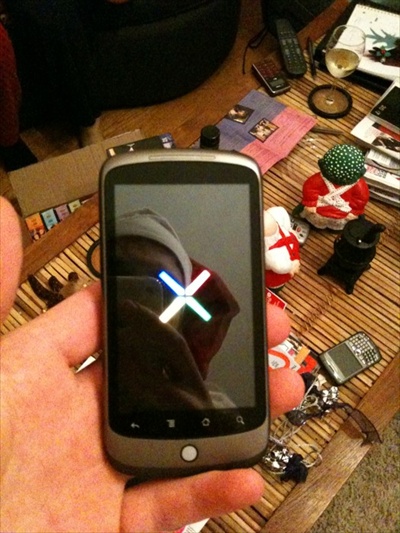 UPDATE: The Nexus One will be sold exclusively through T-Mobile, according to sources.

Referred to as “the iPhone + a little extra screen and a scroll wheel,” Google has finally admitted to developing their own phone with hardware partner HTC. Basically the Nexus One will be a thinner, unlocked, Googlier iPhone. A new post on the Google Mobile Blog confirms the existence of such a device:

We recently came up with the concept of a mobile lab, which is a device that combines innovative hardware from a partner with software that runs on Android to experiment with new mobile features and capabilities, and we shared this device with Google employees across the globe. This means they get to test out a new technology and help improve it.

Despite being officially hush-hush on specific features, Google is yet to crackdown on Googlers who’ve posted photos of the Nexus One in action. The phone itself looks like a slickified version of the HTC MyTouch. While the phone is definitely already in use by an exclusive few, there’s not much more knowledge floating around at this point, other than the fact that we’ll know more soon. Should Apple be worried? It’s hard to tell. Android isn’t backing down, that’s for sure.

Some hardware details are indeed starting to leak, including an OLED touch display, an “unusually large camera,” and running off of Qualcomm’s very own Snapgragon chip. If initial details are correct, we can expect the Nexus to be a speedy little power monster.