Gold-Dispensing Vending Machine Coming to the U.S.: Our Economy Demands It! 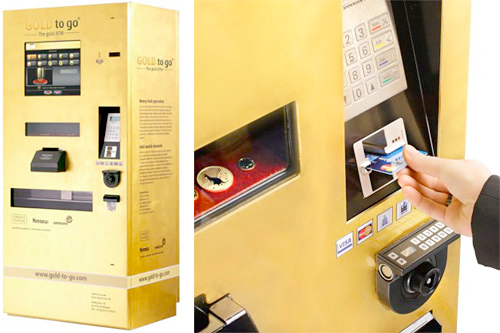 How does the government expect everyone to spend their unemployment checks? On gold, of course. A “couple of hundred” Gold to Go machines, joining the 35 which already exist in the Middle East, Italy, Spain and Germany, will be installed in the United States, so everyone and their mother can buy 1 gram, 5 gram, 10 gram and 28 gram (1 ounce) gold bars, and international coins from countries such as South Africa, Australia and Canada. Easily tradable for plenty of kitties.

The price of gold will be updated six times an hour to keep the price accurate up to at least 10 minutes. Still waiting for unemployment to kick in? No worries. These machines won’t be installed until next year, and they appear to be limited to Las Vegas and Florida, for now. But what are you worried about? You have a Stuart Hughes iPad to save for.