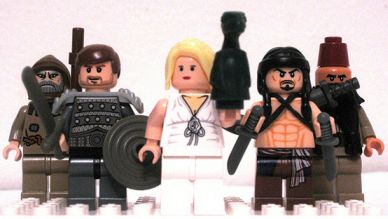 Lately, the internet has been buzzing about “Game of Thrones”, a HBO phenomenon based off of a book series by George R.R. Martin. We’ve seen some epic fanart, some really poorly written fanfics, and even a Game of Thrones “reenactment”. However, these custom Lego figurines might be one of the coolest displays of GRRM fandom that we’ve seen so far.

Sam Beattie has recreated most of the major characters from Game of Thrones, and with some really surprising accuracy. For example, check out those abs on Khal Drogo! Sam created these custom figurines by using pieces from other, less awesome lego figurines.

I sense an epic stop-motion ‘Game of Thrones’ webseries could be in the future.