For the Star Wars Fan That Has Everything — A 3,000 Piece Lego Super Star Destroyer 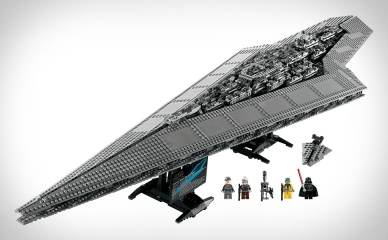 You probably won’t want your kids playing with this Lego set anytime soon. This September, be prepared to spend around $400 to get your hands on your very own Lego Super Star Destroyer. This 3,000 piece marvel weighs in at around eight pounds, and the completed ship will measure 50 inches in length.

The Lego site warns that each customer will only be allowed to purchase five Lego Super Star Destroyer sets — but do you really need more than five ships to conquer a galaxy, anyway?

Just a wild guess, but you can probably assume that most of the pieces in the box will be gray.