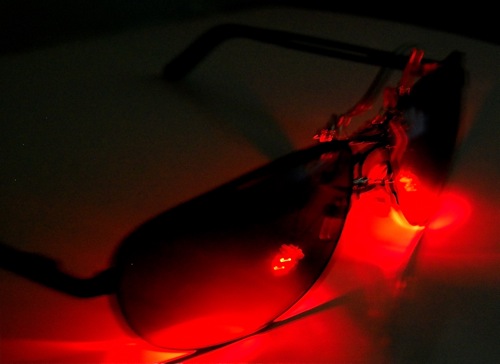 I recently bought a new pair of sunglasses and didn’t need these cheap $6 Walgreens sunglasses I bought in Florida a year ago. With some time on my hands, I quickly modded them to resemble the pair Arnie wore in the classic action flick, The Terminator. This mod can most likely be done without solder, but we’re going to make our pair with solder. Ready to make? Read on. 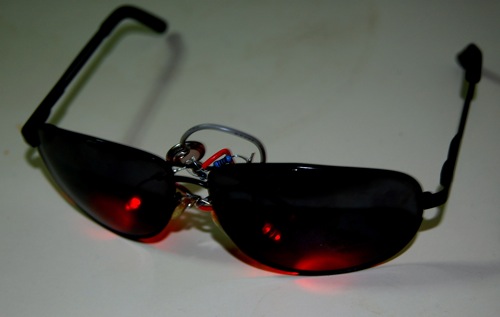 You’re going to want to start with a cheap pair of black sunglasses. These can be had from your local pharmacy for under $10. I’m using an old pair of aviators. You’ll need the following materials to begin:

With these materials, start by taking the two resistors and hooking up an end to the positive wire of your LED. This is the longer of the two wires coming out from the tip of your LED. Wrap the resistor around and solder it on. With these connected, solder the two resistors together with the remaining free ends. When this is done, solder a wire to the connected resistors and solder the opposite end to the positive side of your battery. You’re halfway there! 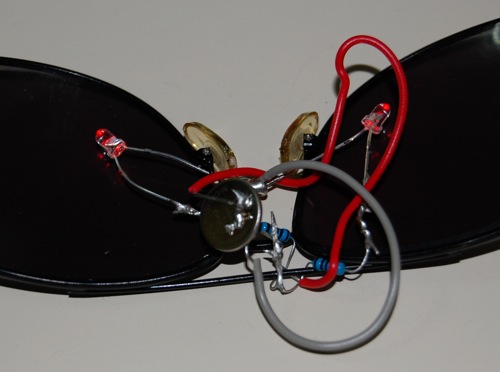 Wrap the resistors around the sunglasses’ frame where your nose goes. This will hold the LEDs in place easily. Bend each LED out so that it rests in the middle of each lens and resembles the look of the Terminator. Now solder the other two ends of the LED together. These are the ground ends. Solder another wire to the connected grounds and then solder the opposite end to the battery. Your sunglasses should light up and you’re ready to rock and roll. Wrap everything around the frame, put ’em on and go piss off your roommates.

You could take this experiment up a notch by introducing glowing LEDs using an Arduino or you could add a simple switch to turn the LEDs on and off. Half the fun of DIY is discovery, so I’ll leave it up to you and Google to get those mods done! 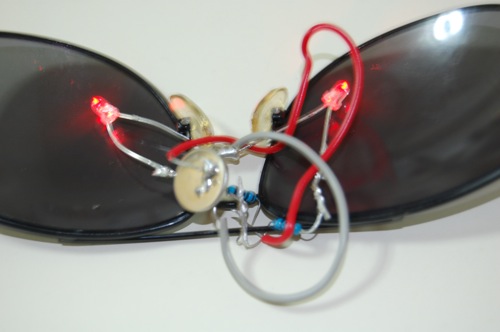