Our calendar is a funny thing. There are all the holiday festivities crammed into December where Americans can’t help but eat, drink, and be merry. Followed closely by the New Year where we think back on how much we ate and drank in 30 days. Which of course leaves us longing to buy a Fitbit in order to track the exercise we might not be getting enough of.

Sales of the Fitbit wearable device surged in 2015. The Motley Fool tracked the trajectory from IPO that year with a stock price of $20. By the end of the first day of trading, the stock had already risen in price by 50%. Not bad for a tiny little Internet of Things (IoT) device. Analysts predict the sale of these devices will grow to 120 million annually by 2019. That pretty much means everyone in America will have one by 2025 — give or take.

But these little wearable exercise trackers are not inexpensive. According to Statista, the average price runs from $59.95 (U.S.) for the Zip all the way up to the Fitbit Surge for $249.95. For some people, that’s about a week’s paycheck. That’s why a good promo code will come in handy when buying one of these wearable fitness devices. 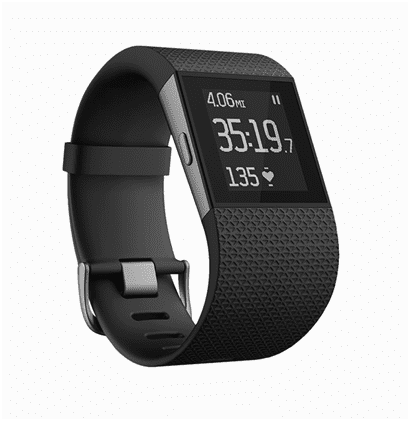 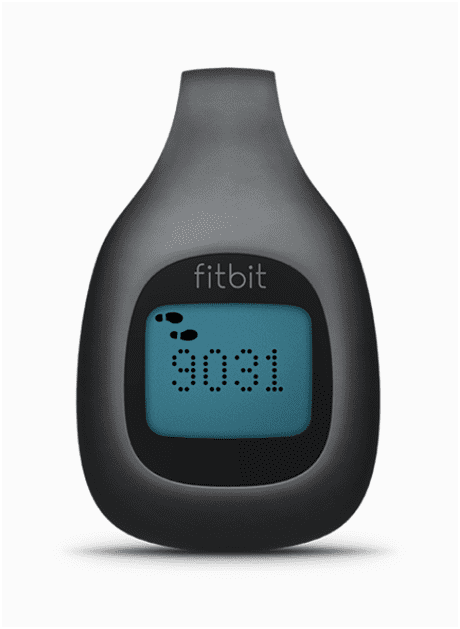 But where can people find the best promo codes that actually work? We have the answers and can help new Fitbit owners save a ton of cash on their purchase.

Fitbit Promo Codes — Where to Look?

Finding a promo code can be a hassle. That’s because 75% of the promo codes out there are single-use or have expired, or there is  fine print that may disqualify the purchase. The real bummer is the shopper may not find that out until they’ve made it all the way to the checkout. With a shopping cart full of goodies, finding out that 15% discount doesn’t apply can throw a budget into a tailspin.

Too, as this article will illustrate, there are a lot of promo code websites offering deals that simply link the user to the manufacturer’s website, where the “promo code” was actually a standard offering from the retailer!

So finding a reputable promo code site is difficult. Let’s walk through a few sites that feature promo codes for the Fitbit and evaluate whether they’re a gimmick or the real deal. 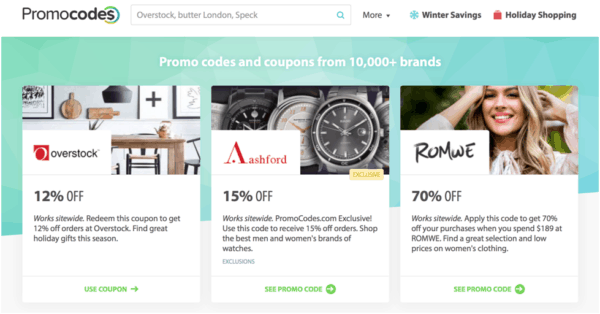 Promocodes has a lot of deals from some big name stores:

They also have promo codes for services like eharmony and Snapfish. At the very top of the site, there’s a search feature where visitors can type in a specific query like “Fitbit”

Unfortunately, there was only one promo code on the Fitbit page. Sad. On a positive note, visitors don’t have to sign in to get promo codes. 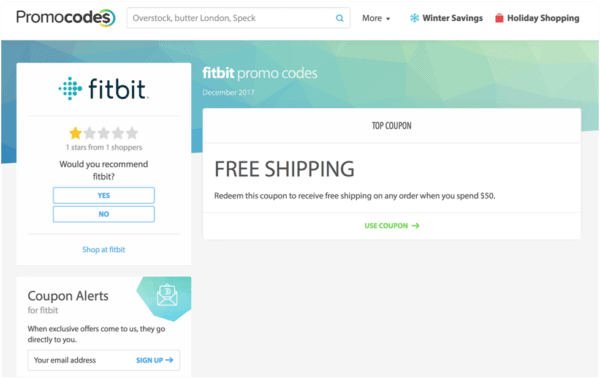 Clicking on the “Use coupon” link simply takes the visitor to the Fitbit site where there was currently free shipping offered by the manufacturer on orders totally $50 or more. 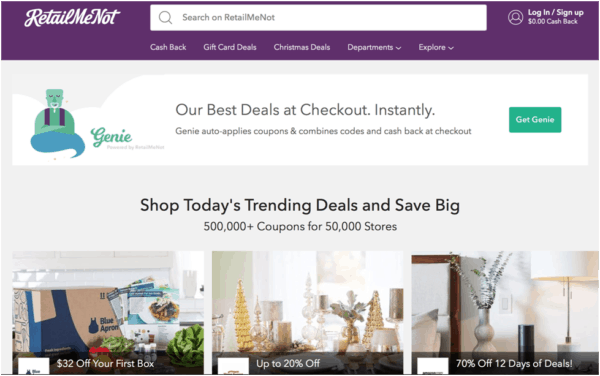 The site has daily deals and a “Top Offers” section. They also have an app for in-store purchases.

In addition to promo codes, RetailMeNot offers a cash back option for those that register through the site. Cashback goes into a RetailMeNot wallet. To read the full cash back terms and conditions, click here.
But, say a new Fitbit is on the shopping list. To see if RetailMeNot has a promo code, type in “Fitbit” in the search icon.

That takes the user to a unique page for the retailer. 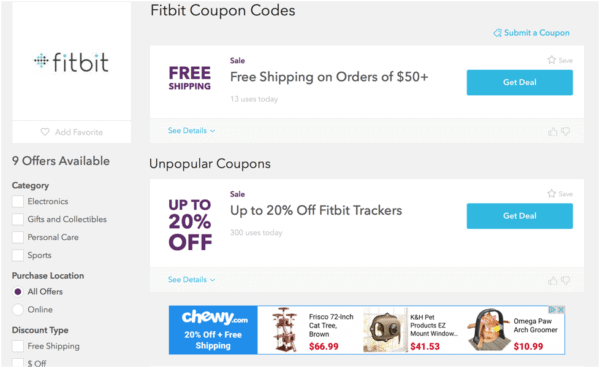 We saw a few Fitbit promo codes that day, including:

Clicking on all three deals simply took the user to the Fitbit website, where no promo codes were needed. Where are the promo codes we promised? Let’s try another website. 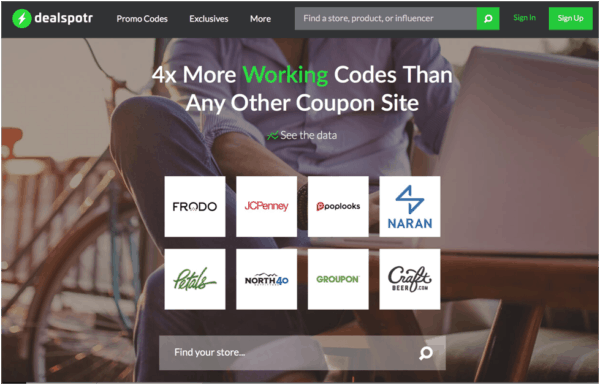 Turns out, the aptly-named Dealspotr is a great place to look for promo codes on anything anyone is buying. The site is kind of a community of deal spotters. Users sign up for free and have their own page where they can post promo codes, like other user pages, and rank the accuracy of promo codes.
Dealspotr features single-use codes from actual shoppers who aren’t using them. This makes for a great database full of codes for visitors to choose from. For example, say that elusive promo code for the Fitbit is still on the to-do list. While the site visitor doesn’t have to log in to find codes, here’s what members get when they do.
First, you’ll see an individualized homepage with a newsfeed that members can personalize to their heart’s desire. 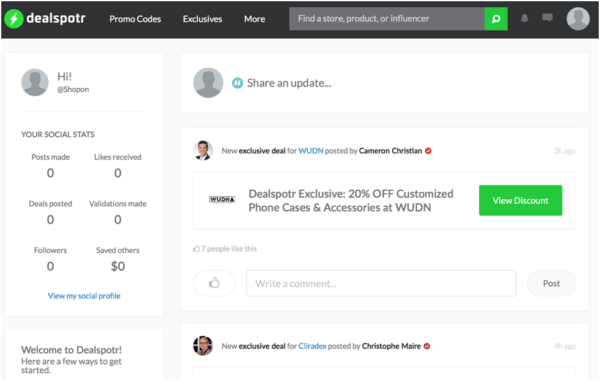 Using the search feature, as we’ve done with other sites, type in “Fitbit.” Look at what happens. The Motherlode! 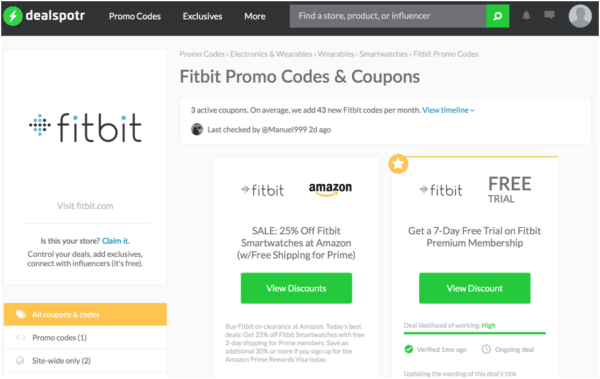 On this one site we found:

You can also search for third-party codes, that is, other stores other than the manufacturer’s site that offers coupons for Fitbit. To find them, login and hit the search icon.

Type in “Fitbit” and go to the Fitbit promo code page again. 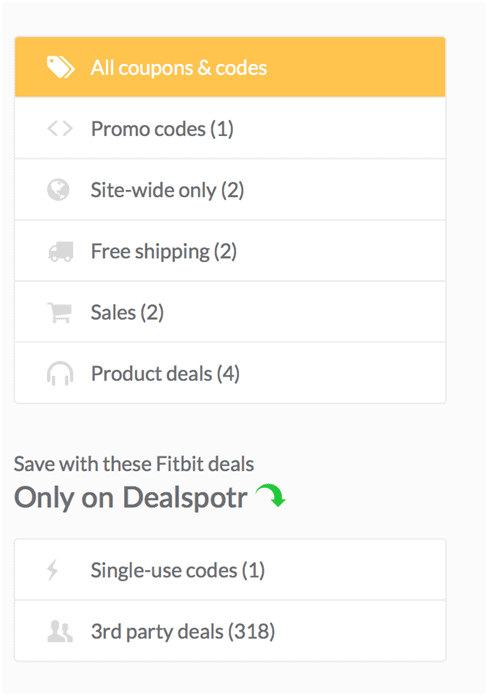 Then look on the left side menu bar under the Fitbit logo. See where it says “3rd party deals?” Bingo! Click here and it will take you to an entirely new set of promo codes. Some of the deals we found included:

Save $10 off the first Fitbit purchased on QVC

Save 25% off plus free shipping on a Fitbit from L.L. Bean

Analysis of Promo Codes for Fitbit?

In the end, the research showed that it’s tough to find working promo codes that are truly unique to the Fitbit product. Each of the sites reviewed showed real promise, however, for all kinds of deals. So no matter what’s next on the shopping list, be certain to check these promo code sites first to save some of the green stuff.