Female Baboons May Be Subject to Domestic Violence 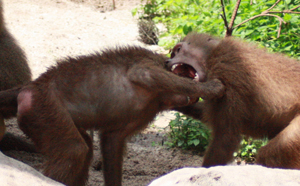 Domestic violence. It’s one of those issues in America and the world at large that many simply do not want to discuss. Reasons for this vary, but regardless of the reason it’s simply an uncomfortable subject. For a long time mankind thought we were the only ones who experienced such behavior, but as it turns out some female baboons may as well.

It’s common for male monkeys, apes and gorillas to “disperse their genes,” throughout the population. In the case of a particular breed of baboon, the papio hamadryas, the opposite is true as it’s the female that goes around to “disperse their genes.” The makes of this particular species of baboon don’t seem to take kind to this, as they often attack the female and punish them through strong bites or slapping.

Here’s where it gets interesting. When a female goes to a new male, the original male will hunt the pair down and engage in a bloody and often gruesome fight with the intruder. The kicker? The female will help her initial mate against the new monkey. This according to several observations made between 2007 and 2009 by Mathew Pines and Larissa Swedell that has been reported in their original “Primates” journal.

I don’t know, kind of gives off a sibling-like vibe of “I can beat up my brother but if you do it I’ll kill you.”