FBI Releases Documents That May or May Not Confirm Roswell Crash 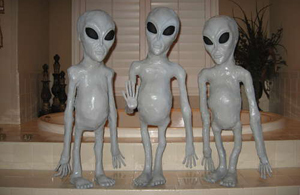 Roswell, New Mexico is famous for one of two things, depending on your point of view. Either Roswell was the site where an alien spacecraft crashed in the summer of 1947, or Roswell was the site of an experimental weather and/or satellite balloon crashing in the summer of 1947. The story of Roswell is known just as much as the many theories about Roswell, and the countless conspiracy theories that have been birthed from the event.

Luckily these preposterous rumors of aliens crashing in New Mexico quickly faded and conspiracy theorists have moved on to new, more exciting things. Now that this has been swept away, we can all… move…

An investigator or the Air Force stated that three so-called flying saucers had been recovered in New Mexico. They were described as being circular in shape with raised centers, approimately 50 feet in diameter. Each one was occupied by three bodies of human shape but only 3 feet tall, dressed in metallic cloth of a very fine texture. Each body was bandaged in a manner similar to the blackout suits used by speed flyers and test pilots.

Yes, the FBI has released documents that pertain to the Roswell crash of 1947. Depending on who you ask, this could be one of two things: 1.) Rational folk would tell you that this is just a typical FBI document not unlike the countless others that are produced that deal with a wide range of issues. 2.) Acknowledgement that Roswell was real and a backhanded admittance that we are not alone in the universe.