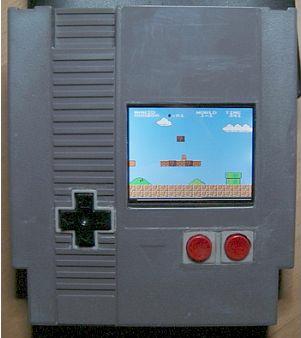 Remember that Nintendo Famicom which was built into an NES cartidge? That was cool and all, but a post on Ben Heckendorn’s console hacking forum by user Darkeru revealed a new approach which may have just one upped it. Not only did he manage to fit the NES inside the cartridge, he also has managed to embed a controller and a screen!

The catch? It doesn’t play cartridges. That’s alright though, since this hack relies on games already integrated into the chip. This prevents the bulkiness of having a cartridge sticking out of a cartridge and makes the system comfortable and more portable. It runs on three N-cell batteries, so don’t expect to be playing NES games endlessly.