‘Smart fabric’ company Eleksen has created a prototype fabric keyboard that doubles as a carrying case for a UMPC. It’s nice to see alternative keyboards like this, because while computer technology has advanced in many other areas, keyboards have remained mostly static. The device consists of a network of sensors and wires sewn into a neoprene wallet-case. Steve at The Carrypad UMPC journal has been testing the prototype and claims it has excellent key feel, allowing him to type at over half his normal typing speed. Not bad for a keyboard with no key travel. Another pic after the jump. 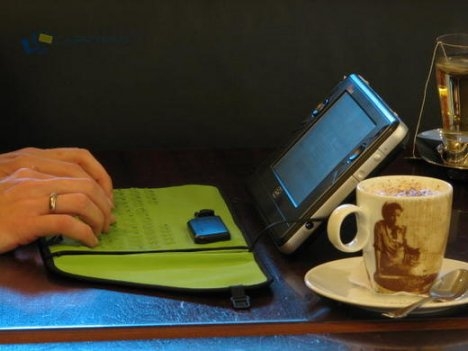 Eleksen is not producing these for sale yet, however. They are waiting for someone to either license the technology or place a large manufacturing order, neither of which has happened yet. Hopefully someone will soon, because with all the different layout, material, and size options, this is sure to find a wide variety of applications. — Mike Payne