EyePod: The Anatomical Steampunk Cousin of the iPod 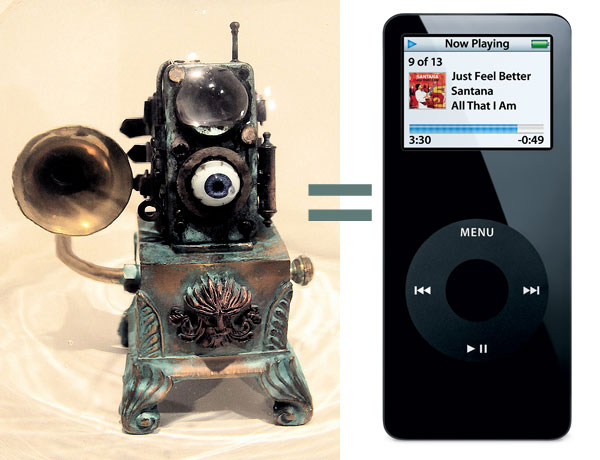 Something tells me the EyePod is the black sheep of the family.

Created by the self-appointed “Dr Grymm,” the EyePod is actually a mod of an iPod Nano, so believe it or not, buried somewhere deep in that monstrosity, is a functioning portable media device.

A custom mod of an Apple iPod Nano 1st Gen. The design is inspired by Mary Shelley’s Frankenstein. The “eye-Pod” can be worn on the wrist via the leather cuff, or placed on it’s custom Victrola base. All functionality of the iPod remain intact and a hidden USB cord retracts from the base to either a wall charger or your computer. There are hidden pressure plates that when touched send a strobing “static charge” into the quartz crystals on either side of the magnified veiwing portal. Music can be heard either through the Victrola horn or though a portable personal hearing apparatus.