Electricity Could Be Used to Extinguish Fires 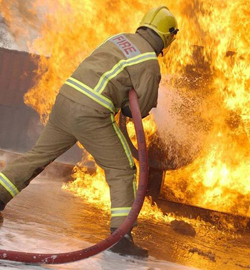 For as long as man has been on the Earth, electricity has been one of the leading causes of fire. In fact, one of the fables pertaining to how mankind was first introduced to fire was because of lightning striking a tree. From there, well… yeah. “Electrical fire” tends to be used more for “we think it was arson but can’t prove it” than for actual fires caused by electricity, though it does happen.

But now Harvard argues that electricity could be used to extinguish fires!

So, how is this accomplished? Well, according to Dr. Ludovico Cademartiri, a member of a team of fellows at Harvard University, the electricity charges the soot particles within the flames, forcing the fire to lose stability and essentially poof from existence.

They demonstrated this with a 600-watt amplifier that was connected to a wand which fired electrically charged beams at the fire. The 600-watt amplifier was used for the experiment, but the researchers are confident that the what would work with a smaller amplifier. They say that this would allow the device to be worn by firefighters or be mounted into ceilings in lieu of a sprinkler system.

I’m not sure how I feel about being stuck in a high rise during a five-alarm fire and having to worry about electrical pulses being fired at me. But then again I tend to worry.

Don’t expect to be seeing giant electrical generators being used to fight large fires any time soon. Cademartiri thinks that, as of now, the technology would work best with confined spaces.

Personally, I’m curious about some of the other technology that this could assist. The idea of this being used inside of power plants is especially interesting.