Resistive RAM by Crossbar Technologies could well be the future of memory technology, rendering NAND insignificant. 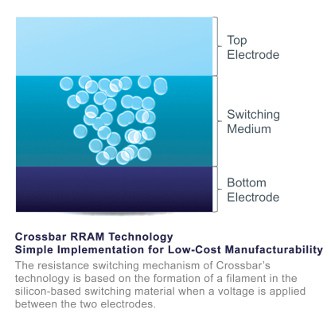 The new RAM from Crossbar is not only half the physical size of NAND RAM, but it is also 20 times faster writing at around 140MB/s. Need more reasons to check out this new memory technology? It’s less draining on power, using 20 times less power and lasts 10 times longer than NAND. Need even more reasons to check out RRAM? It reads data at 17MB/s. The Resistive RAM from Crossbar is most impressive however, in terms of its data density. One 200mm2 chip has the ability to offer 1 TB of storage space.

It won’t be long before devices are offering RRAM, most simply because the new three dimensional chips can be structured using existing production infrastructure. That means no waiting for plants to be altered to create and start rolling out the new technology.

There is no information available currently on the price point of the RRAM, but we’re not expecting them to be the most affordable option – at least not yet. At the moment Crossbar is the only holder of patents to RRAM, so this could prove to be an obstacle in terms of affordable pricing.