Could This Photo Be the iPhone 5 Slim? 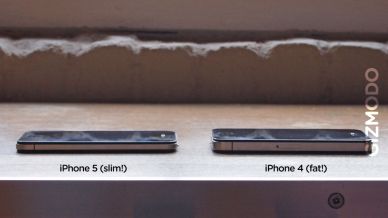 A new photograph has been released by Gizmodo, which is supposedly of the new “iPhone 5 Slim”. This is exciting for many iPhone users, since a similar photo of a “slimmer” iPhone 5 was recently leaked in France.

However, as the editors at Gizmodo pointed out — their photo is a fake. It took about ten minutes in Photoshop for the photo of the “slim” iPhone 5 to be created.

This isn’t necessarily proof that the leaked French photo of the slim iPhone 5 is fake. However, it does shed some light onto the true unreliability of “leaked” photos. Theoretically, any of us could take a picture of a regular iPhone 4, and shrink it down to make people believe we were holding a slim iPhone 5.

On a related note, I’ve decided to Photoshop an iPhone with two cameras, which will make people believe that the new iPhone can handle 3D. Oh, wait, that’s already been done.