City Foundry Bots Come In All Shapes And Sizes 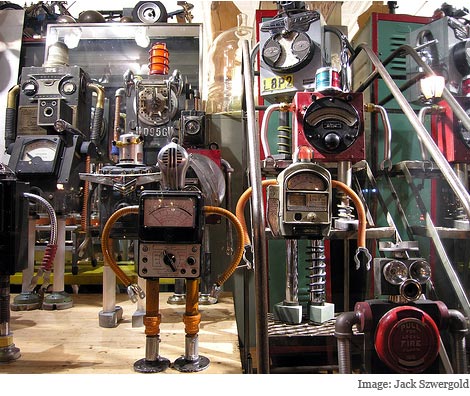 Happen to be in the New York City area? Then check out the robots on display at the City Foundry, 365 Atlantic Avenue in Brooklyn, New York. These robot sculptures were created by Gordon Bennett out of a mixture of random objects found which are both old and new. These aren’t robotic bartenders trying to get you drunk so they can take advantage of you. No, they’re more on par with the felt robots, they just sit there and look pretty.

Bennett is even willing to sell some of the robot sculptures, if you give him an offer he can’t refuse. The sculptures are going from anywhere between $750 to $6000. That’s a lot for an old battery tester with legs.