China Building Mysterious Giant Structures in the Middle of the Desert 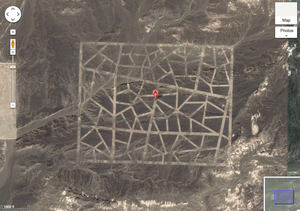 Does China know something we don’t?

Arial photos have captured some really weird stuff out in the Chinese desert. The new photos show several oddly designed grids, and some circular formations with obstacles. Two of the formations that have been discovered so far are an odd network of white lines arranged in a haphazard design. It seems that these particular oddities are designed to be able to be seen from orbit.

Of course, speculation among internet users has exploded, with people suggesting everything from military applications to super-secret extraterrestrial communication systems.

Is China signaling aliens? Is this some super-secret spy project? Or, is it something innocuous, like an irrigation system, and the internet is just blowing it totally out of proportion?