Chess and Boxing Now Have Something In Common 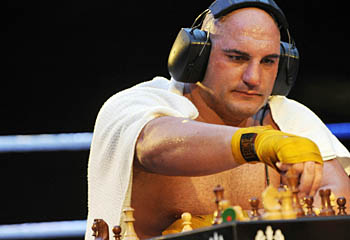 Who would’ve thought that boxers would like to exercise their brain in ways other than getting punched in the face. Berlin is home to the world’s biggest chess boxing club. That’s right, you read correctly: chess boxing club. A chess boxing match consists of six rounds of chess and five rounds of boxing but a knockout or checkmate could end the game prematurely.

Two men square off in the ring, separated by a chess board. After four minutes of mind bending chess, the two opponents put on their gloves and go at it. Three minutes of heavy-handed brawling goes down before the bell is rung, the chessboard is set back up in the middle of the ring and the boxers find themselves faced off with yet another potential check mate scenario.

“For me the thing is to channel your violence, to control it. Hence the marriage between boxing and chess,” said Rubingh, president of the international federation of chess boxing.