Blu-Ray does Mac, just not by Apple 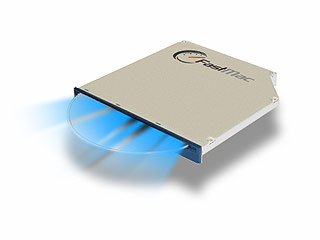 FastMac recently announced its release of an external Blu-Ray player for the Mac OS X, beating out Apple to the punch of integrating Blu-Ray into the Mac infrastructure. This could be a huge advantage for Blu-Ray over HD DVD now that Mac users will happily have the capability to watch their favorite Blu-Ray movie.

The Blu-Ray drive upgrade will allow for a 1x BR-RW burn speed, and will also allow for 8x DVD-RW. It comes bundled with the award-winning Toast 8 Titanium software and includes one 25GB Blu-ray rewritable disc so you can get started on the double. Though, this technology won’t come cheap. The FastMac Blu-Ray Player is available now for $799.95. — Andrew Dobrow