Asus to Build PCs Inside Their Shipping Boxes 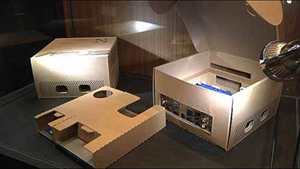 When building a computer, you’re often left with a lot of garbage in the form of the various boxes that the components came in, the cavalcade of promotional material that is included in most major purchases nowadays, and those annoying little plastic bags that the screws come in. ASUSTEK has taken a step to remedy these issues, and in doing so the company has provided a truly “green” alternative to that heavy metal, glow-in-the-dark tower with skull.

That alternative? Use the box.

Asus has initiated a new policy where all mini-ITX motherboards will be built into the boxes they’re shipped in. If course, at first glance you would think that this is an absolutely insane idea considering computers generate an intense amount of heat and cardboard is kinda flammable, but something tells me that Asus wouldn’t release such a product without making sure that it won’t double as a campfire.

What about durability? According to Asus, the case is is good for about a year, though there is no reason that with proper care and maintenance, you could easily stretch it for much longer.

In all honesty, I would rather have something made of metal or hard plastic. All the same, I applaud Asus for their ingenuity.