Astronomers — Life on Earth Was Nearly Destroyed in 1883 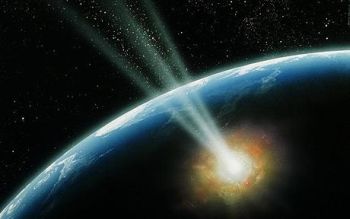 A little over a century ago, we were a mere 300 miles away from being completely annihilated by a pack of apocalypse-inducing comets.

At least, that’s the theory that was just recently presented by astronomers. They re-analyzed some data captured in 1883 by an astronomer named José Bonilla. Bonilla took note of over 450 objects that passed between the Earth and the sun, which were surrounded by a type of “mist”. However, since the objects weren’t seen by other astronomers a short distance away, they were very likely passing extremely close to Earth’s atmosphere.

Of course, not everyone agrees with this theory. Some skeptics theorize that Bonilla should have also seen a brilliant display of smaller comet fragments burning up as they entered the Earth’s atmosphere. So, like with any theory, it’s still a matter of interpretation.