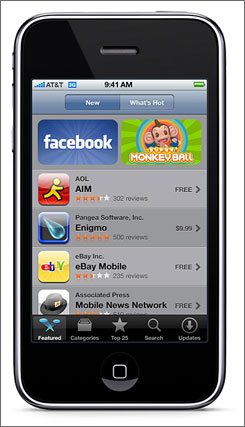 Apple originally expected around 200 applications to launch with the iPhone 3G on Friday. Now that number has blown up to over 500 apps and developers are still working. According to Apple, response from developers has been tremendous and by the looks of some of the available apps (some of which are already available on iTunes), customer response should be equally pleasing.

With AOL releasing a free AIM app, Facebook following suit and other big players like eBay, SEGA, MySpace joining the fray, I wouldn’t be surprised to see the iPhone 3G surpass sales of the original iPhone. 24 hours from now, we’ll find out.