An Asteroid is Following Us 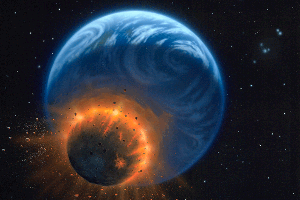 There are billions of things floating around in the galaxy. Hell, there are tens of millions of objects flying around our solar system, but for the first time we may have found a cosmic object that is actually following us.

that object is an asteroid. Specifically, asteroid 2010 SO16. Sexy name, right? Well this asteroid, which was discovered by David Asher and Apostolos Christou last year, looks like it shares an orbit with Earth. We say “share” because this asteroid looks like it’s maintained a near-identical orbit around the Sun that the Earth has.

Because of the steady orbit of this asteroid, it was very easy to look over it for may years. In fact, according to Christou, this asteroid may very well have been in this orbit for hundreds of thousands of years.

It keeps well away from the Earth. So well, in fact, that it has likely been in this orbit for several hundred thousand years, never coming closer to our planet than 50 times the distance to the Moon.

So, what is it? A few theories exist, but the one that will stand out to a lot of people is that this asteroid is, in fact, part of our moon that was never caght up in the initial gravity event that allowed the moon to form. The problem with this theory is that it would then have no cause for winding up where it is now.

You got me, NASA. I want to know what this is and how, exactly, it got there.