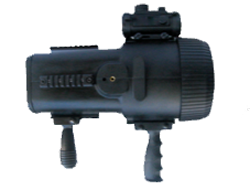 Several law enforcement agencies, especially those who deal with crowd control on a regular basis, are always looking for non-lethal ways to take down individuals. Current solutions include beanbag rounds for shotguns, stun guns, pepper spray and a strobe light. Seriously, some police departments use a strobe light to blind perps. Now Genesis Illumination has developed another method of takedown for police, this one involving a light that is brighter than airport runway lights.

Dubbed the “StunRay,” the device is designed to deliver a highly concentrated beam of light that would overload the neural networks that are connected to the retina, temporarily (one hopes) blinding the suspect. The StunRay itself, which would be handheld, would not require a special kind of bulb to generate light. Instead it would use a 75-watt light, which would be amplified by optics that are designed to focus the light.

Should you find yourself on the business end of one of these, you can expect to be blind as a bat for “[up] to 20 minutes,” according to inventor Todd Eisenberg. The device is also designed with a “continuum of response,” which will have a different effect on the person depending on how close they are to the source of the light. Suffice to say, the closer you are the brighter it’s going to be.

This could be used for a variety of purposes, but for now the intended use is crowd control and to incapacitate dangerous criminals.