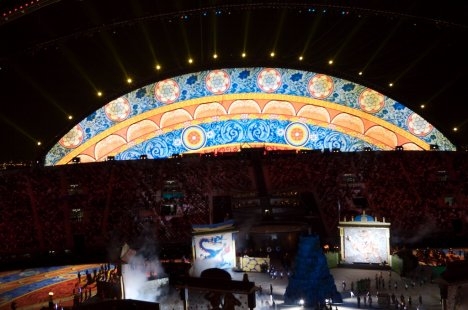 Over at the Asian Games ceremony in Boha, Quatar in late 2006, Element Labs built a humoungous, gigantic, enormous, huge, spectacular, 45,000 square foot LED screen. The things that look like ants under the screen? Yeah, those are people.

In keeping with the circular structure of the stadium, the screen was designed to be curved. The entire screen is 165 meters wide along the curve, reaching 39 meters at its highest point. The screen is comprised of 20,000 individual Versa RAYs, which laid end to end would span 58 kilometers (over 36 miles). 762,000 individual LEDs were used, with a pixel pitch of 77 millimeters.

How no one noticed this marvel when it was happening is pretty spectacular. The pure mass of this thing is really staggering. — Andrew Dobrow
Link [via]